What Are The Different Types of Oil and Gas Separators?

Let's dive into what an upstream oil and gas separator is, how they work, and all the different types of separators that are currently being used in the field today.

What is an Oil and Gas Separator?

An oil and gas production separator is a pressure vessel that is used for separating the fluid components of an oil and gas well stream into both gaseous and liquid constituents.

The separators can be installed in either an onshore processing facility or on an offshore platform. Separators are also used in numerous applications including gasoline facilities, upstream and downstream of compressors, and liquid traps in gas transmission lines. They can also be found on dehydration unit intakes, gas sweetening units, and various other types of desiccant-filled equipment.

There are more separators on oil and gas locations or process facilities than any other type of process equipment. Sometimes they are called scrubbers, slug catchers, FWKO’s, centrifuges, and many other names.  However, all of the vessels mentioned above that are designed to separate gas and free liquids have the same fundamental goal.

Separators can be classified in two primary configurations; the position of the vessel and/or the number of fluids to be separated.

Each of the vessel orientations (horizontal or vertical) can be either 2-phase or 3-phase. 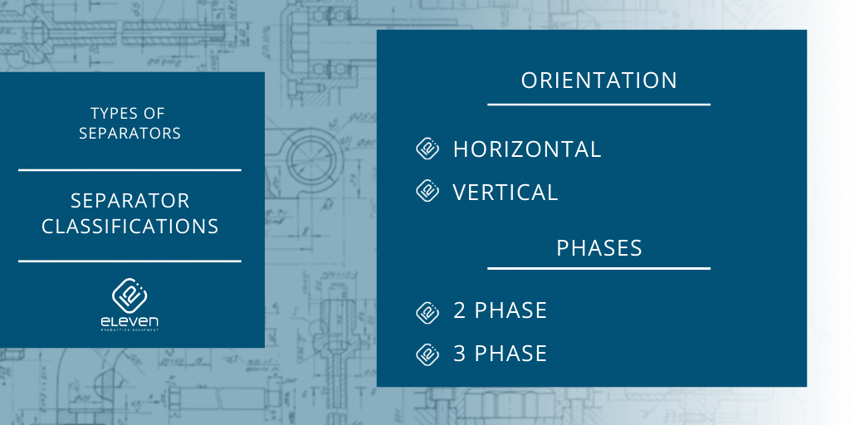 There are many types of separators used successfully in the field, but most often, depending on the environment in which they are housed, they can be divided into the following categories:

Horizontal separators are versatile vessels that can be used in applications where either gravity or gas pressure is insufficient for effective separating. These vessels are similar in shape and design to vertical contactors, with a collection system, surge drum, and tray packs as described above.

In some cases, horizontal separators have been used to handle gas/liquid flow rates as high as 1 MMSCFD/8 MMscf (150 m3/mton). Horizontal separators are available in a wide range of pressure ratings and can be equipped with other features such as trays, weirs, etc., as necessary.

Vertical separators can handle a large range of gas and liquid flow rates. Vertical contactors are the most popular type of separators for production service on offshore platforms, but they can also be used in some onshore applications where gravity is not sufficient to separate liquids from the gas stream.

Contactors have a two-phase differential pressure across their bodies, thus allowing more even distribution of liquids on the top and bottom surfaces. Contactors use a collection system that collects free liquids in a surge drum whenever a surge occurs. The level in this drum must be maintained below the level of the trays at all times to prevent re-entrainment of free liquids into a vapor air stream.

Due to the greater vertical distance between the liquid level and the gas outlet, there is less of a propensity for the liquid to revaporize into the gas phase. This type of separator is more difficult and expensive to fabricate and ship in skid-mounted configurations, and it requires a larger diameter separator for a given gas capacity than a horizontal vessel.

However, there are some drawbacks associated with vertical separators that must be considered. The vessel has a large volume and therefore takes up more space than spherical separators; it also requires more piping for connection purposes.

Spherical separators offer an inexpensive and compact vessel arrangement. They can handle high vapor and liquid loads with ease. They are particularly suited for the removal of sand and other free liquids (slug load) and medium- and large-diameter gas streams (up to about 12 in [DN 300 mm]).

Spherical separators are low in cost, simple to operate, compact, etc. The trade-off comes in the form of lower efficiency at low gas/liquid ratios. That's why they are not very common nowadays.

A typical multiple-effect system consists of a number of individual vessels connected in series, with one or more steam extractions between each vessel. Each stage is generally equipped with an overhead vapor line, a down comer line to allow liquid from the previous stage to enter its separator section, and a steam trunk which supplies heat to the last stage.

There are two types of "phase categories" that separators can be grouped within:

Two stage separators, also known as double effect vessels, use two separators connected in series. The first vessel separates the liquid from the vapors coming from the previous vessel, and these liquids are used to strip the second stage. These types of vessels have a separate vapor line at a higher elevation than that of a single-stage unit to provide an area for the purge vapors.

Three-phase separators use a rapid vertical stripping action to recover the gas components from a complex mixture of gases, vapors, liquids, and solids. The three-phase separator consists of two vertically arranged chambers separated by an annular area, in which are mounted radial vanes.

A high velocity stream of steam is passed through the radial vanes for jet entrainment in the chamber below. Stripped crude oil collects in the lower chamber, while gas enters through open slots in the upper chamber.

This type of separator is best used in conjunction with a vessel that contains only gas or only liquid, so that the 3-phase separator can fully separate all three fluids. When this type of vessel is connected between two 2-phase vessels, it typically serves as an oil/water/solids separation device, with little stripping occurring at high velocities.

What Are Some Other Common Names for Oil and Gas Separators?

Some other common names that oil and gas separators are known by in the industry are as follows:

A Deep Dive Into Oil and Gas Separator Classifications

Discover the strengths that the 12:eleven specialists in innovation and customization bring to production and process equipment. Contact 12:eleven and experience quality that is reliable, efficiency that is proven and service that is unsurpassed.

Recognized nationwide for quality and performance, our separators help improve and accelerate sustainable production with more efficiency than ever.

We invite you to request a quote for our products or services.

As a specialty company providing custom design, engineering and fabrication of production and process equipment, we are dedicated to doing what’s right for our customers and passionate about creating value on every project.